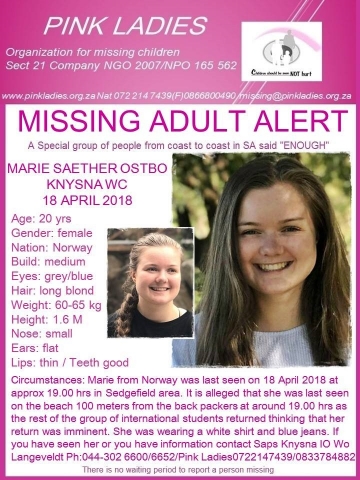 Almost two weeks after the disappearance of Marie Sæter Østbø, the 21 year old Norwegian girl who disappeared from Myoli Beach on Wednesday 18 April, there is still no sign of her, or indeed any new evidence as to what happened.
Her family in Norway is understandably desperate for any news they can hang hope on, or in the very least some sort of closure. Likewise, the Sedgefield community is devastated, and so very heart-sore for the Østbø family. But with every day that goes by, it seems that the chances of finding her are getting less and less. 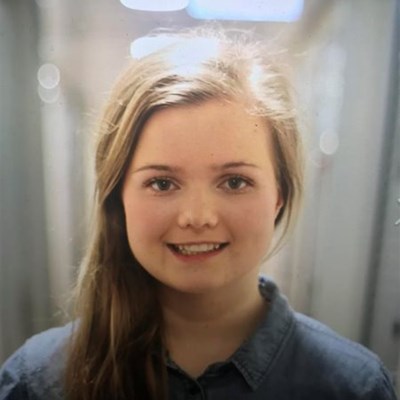 And whilst the search continues, unfortunately, so does the spread of misinformation and conjecture. With unsubstantiated ‘sightings’ of Marie in North West province being shared on social media, plus a false story of her body being washed up on the beach in Wilderness, and several versions of what has happened since she went missing being bandied around in local and international media, there is no doubt that family and friends of Marie must be desperately frustrated.

Gathering information and indeed confirmation from sources close to and within the organised search, we have ascertained the following details:
Marie arrived in Sedgefield, as part of a tour, at 17.30 on Wednesday 18 April. The group was due to stay at Afrovibe Back Packers near Myoli Beach. At approximately 18.10 a couple who were part of the tour, went for a walk on the beach, followed five minutes later, by Marie, who was walking alone.
As the wind was already blowing, the couple decided to head back fairly soon. They passed some way behind Marie who was sitting on the sand, facing the sea, but did not stop to call her. As they went up the dune they turned to take a photograph of her from the back. This was the last picture taken of the Norwegian girl before her disappearance. 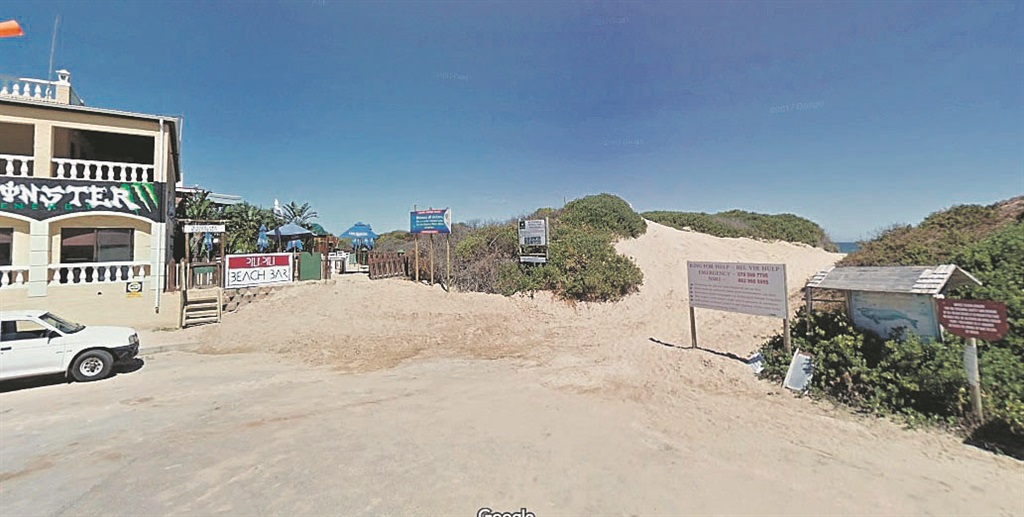 15 to 20 minutes later, members of the group grew concerned as she had not come back to meet them for dinner at 19.00, as had been arranged. When Marie did not answer calls made to her phone, the tour guide went to the NSRI board in front of the beach and called the emergency number. It was 11 minutes past seven when the call was logged.

Realising there might be need for a search of both land and sea, a member of the NSRI contacted Sedgefield Community Orientated Policing (COP), suggesting they also respond to the scene.
Both NSRI and COP members arrived at Myoli at 19.32 and the search commenced. They were joined by SAPS K9 Search and Rescue, and also asked local security companies to check their clients’ homes in the area. SAPS meanwhile took statements from Marie’s friends, the tour guide and staff at PiliPili Beachfront Restaurant. 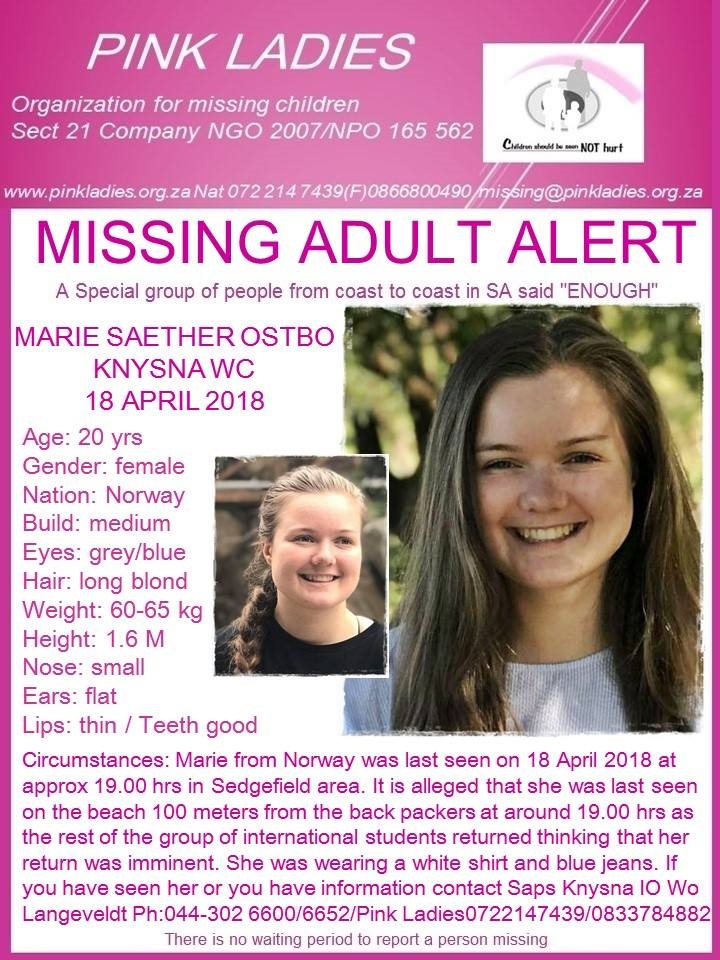 The NSRI crew searched the beach on quad bikes and 4×4 vehicles from Myoli beach, right up to Platbank, whilst COP members checked from the river mouth round to Myoli, then the dune, then Claude Urban Drive, including line searches of empty properties and construction sites. They also made door to door enquiries, as they believed Marie could have lost her bearings and sought shelter from the storm.

The weather was extremely bad and the seas exceptionally rough. Members of the search parties could barely hear each other above the wind, and visibility was very poor.
Just after midnight, COP volunteer Michael Simon and two SAPS members discovered a pair of white shoes, an iPhone and a white cap lying on the beach. They were not ‘in a neat pile’ as has since been reported, but approximately 2m apart. Whilst they may have been blown by the wind, they were above the high water mark and the phone was still working.

It was quickly ascertained by speaking to members of the tour group that the shoes and phone belonged to Marie, but the cap did not.

The search stopped at 02.00 and restarted at first light – 06.30. By this time it was all hands on deck. More members of SAPS, a Police Dive Unit, Metro Search and Rescue, EMS, the Community Police Forum, Wilderness Search and Rescue, Sedgefield Fire Department and the ASR/EMS Skymed rescue helicopter, arrived to join the K-9 Search and Rescue unit, NSRI Wilderness crew, COP, and Neighbourhood Watch members on the scene, and the search of both land and sea recommenced.
Efforts continued for the whole day, and the days to follow, with various people giving assistance, including the pilot of a motorised paraglider who undertook aerial patrols up and down the coast over the next four days.

When SAPS issued an official alert regarding the missing girl, there was unfortunately a discrepancy in the description of her clothing. Whilst the ‘Missing Person’ report said that she was wearing a white top and blue jeans, it has been confirmed by those on her tour group that she was actually in a dark blue floral top with black long pants. (See picture on page 3)
This mistake is thought to have been as a result of misreading the CCtv footage from the security camera at PiliPili beach bar, taken just before she left for the beach. According to a local CCtv consultant, infrared will show dark colours as light at night. When the footage was taken the infrared was already on as the light was fading, which had a confusing effect on the picture.

There has also been misinformation in some reports regarding Marie’s camera. Whilst it has been stated that she had it with her on the beach, it has been confirmed that the camera was left in her bedroom, where it was later found by SAPS.

Over the following weekend as the search continued to spread further, various members of Norwegian media arrived to report the story of their missing compatriot. Unfortunately there was little in the way of good news that could be offered to them.

On the following Monday a substantial aerial search was undertaken by a Working on Fire helicopter, with various organisational representantives on board. The chopper flight covered the length of the beach, dunes and shallows from Gericke’s Point to Knysna Heads, including over the Swartvlei Lagoon, and then following the rip tide parallel to the coast 2-3km out to sea, all the way to Buffalo Bay.

By Tuesday 24 April SAPS spokesperson Captain Malcolm Pojie was left with no choice but to advise the media that the search had to be scaled down.
“It has already been seven days since she was reported missing, so whilst we will resume the search, it will be a scaled down operation as far as our resources are concerned,” he said at the time.

Mike Hofhuis, director of Safety and Security for Sedgefield Ratepayers and also the Chairperson of COP is convinced that the search has been comprehensive and has is covering as many bases as possible. “We wish to thank all the emergency services and community members for their assistance,” he said. “Specifically SAPS K9 Rescue, EMS Search & Rescue, NSRI, the Police Dive Unit and Sedgefield Fire Department.”

Hofhuis also cautioned members of the public to report any information they might receive to the relevant authorities, rather than on social media. “In the interests of Marie’s family and friends, please refrain from speculation, or even sharing speculation of others.”
Sedgefield Neighbourhood Watch Chairperson Michael Simon, who was one of the first responders on the scene and on the forefront of the search effort, declined to comment on what may or may not have happened due to the sensitivity of the case. “I do hope that there is closure soon for her family and friends in Norway in what must be a very difficult time for them,” he said.

I'm definitely loving the information. I'm bookmarking and will be tweeting this to my followers!
Outstanding blog and outstanding design.