Fish Farming: Flesh of fish that we eat has turned into “a deadly chemical cocktail”

Farmed Salmon — One Of The Most Toxic Foods In The World

It’s safe to say, that often times, we overlook what is behind the food that is in front of us. Fortunately, in this day and age, we are living in a time where people have become more conscious and critical of the food they’re eating. With the growing movement of people straying away from animal product consumption, we are naturally beginning to learn more about why people are cutting out this aspect of their diets.

Fillet-Oh-Fish, by director Nicolas Daniels, takes a critical look at the fish industry, investigating fish farms and factories all over the world in an extensive initiative towards educating people on the fish they consume. Though our perception of fishing is rather ‘romanticized’, according to Healthy Holistic Living, when it comes to large-scale food production, it’s an entirely different story.

According to Dr. Joseph Mercola, “Today’s fisheries are faced with a range of severe problems, from overfishing to chemical pollution and genetic mutation from toxic exposures.” The producers of the documentary note that through intensive farming and global pollution, the flesh of the fish that we eat has turned into “a deadly chemical cocktail”. Even so, the fish business continues to boom, merely to protect the image of modern fisheries from the public.

The investigation kicks off in Norway, where they have a look at the chemicals that are used in fish farms today. A respected Norwegian environmental activist by the name of Kurt Oddekalv believes that the farming of salmon is “a disaster both for the environment and for human health.”

Among the Norwegian fjords that contain salmon farms, there is said to be a layer of waste about 15 meters high, consisting of bacteria, drugs, and pesticides. The seafloor is apparently destroyed, and due to the sea farms being situated in open water, there is no way to contain the pollution as a result of these farms. Upwards of 2 million salmon can be held in a crowded space, with the crowded conditions leading to disease that spreads rapidly through stressed salmon. Oddekalv reports that sea lice, as well as Infectious Salmon Anemia Virus has spread across Norway, while consumers are not informed of the fish pandemics, and continue to purchase diseased fish. 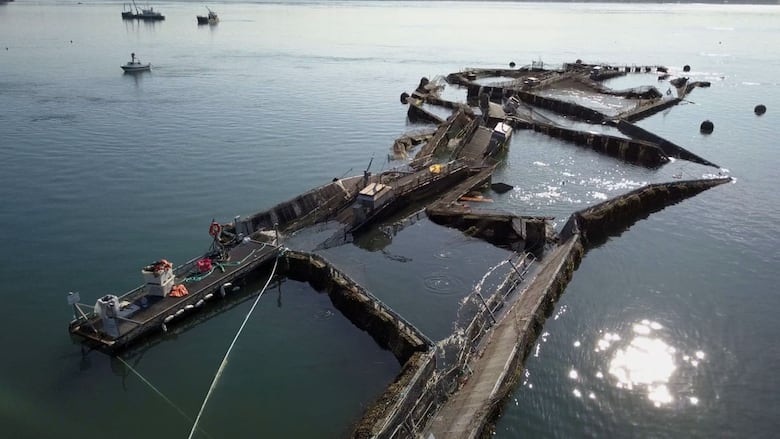 Drone footage shows the mangled remains of a net pen near Cypress Island in Washington state that collapsed Aug. 19, 2017, releasing, what a report by state agencies estimates at about 250,000 Atlantic salmon into Pacific waters. (Beau Garreau)

The passage of the legislationmeans the state will no longer allow commercial net-pen aquaculture for Atlantic salmon in state waters.

Current leases will be allowed to run out. The last one expires in 2025.

“The state ban is a strong stance to ensure the protection of our marine environment and native salmon populations in the Salish Sea,” Ranker said in a release.

“The economic, cultural, and recreational resources of these incredible waters will no longer be jeopardized by the negligent actions of this industry.”

The farming of Atlantic salmon on the West Coast is a hotly debated issue due to fears the foreign fish could cause harm to the five wild species of Pacific salmon.

Atlantic salmon are not native to Pacific waters, but are a major aquaculture species in Washington state and British Columbia. 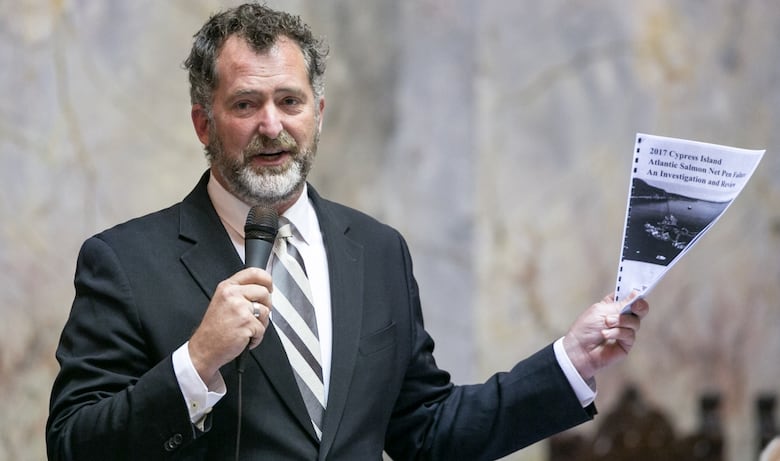 In a statement, Cooke Aquaculture spokesperson Joel Richardson said the company was “deeply disappointed” by the news.

He said the move would have dire consequences for 600 rural workers in the state and said the company had planned $75 million in spending in the state.

He says the company is considering next steps.

“We know that we have work to do with our state, tribal and community partners to rebuild public confidence and demonstrate the value that our industry brings to Washington and the world,” he said.

A previous attempt to end foreign fish aquaculture in Washington State was passed by the senate, but failed to clear a legislative deadline in the House Agriculture and Natural Resources Committee, the company said.

Cooke says it is the only company running net pen fish farms in the state.

But in British Columbia, at least two voices are hailing the move.

Alexandra Morton, an activist and independent scientist, said she was surprised Washington went through with the ban.

“To see that vote go through … it was incredible.”

Morton says bill could have been stronger by banning all open-pen fish farming — not just Atlantic salmon. She says the solution is to move the work onto land-based pen.

Chief Robert Chamberlin with the Union of B.C. Indian Chiefs says the ban will be welcomed by Indigenous people in B.C. and Washington.

“It’s a real leadership role on the proper and appropriate value we need to put on wild salmon,”  Chamberlin said.

He said he and other Indigenous leaders in B.C. will be pushing the province to follow suit. 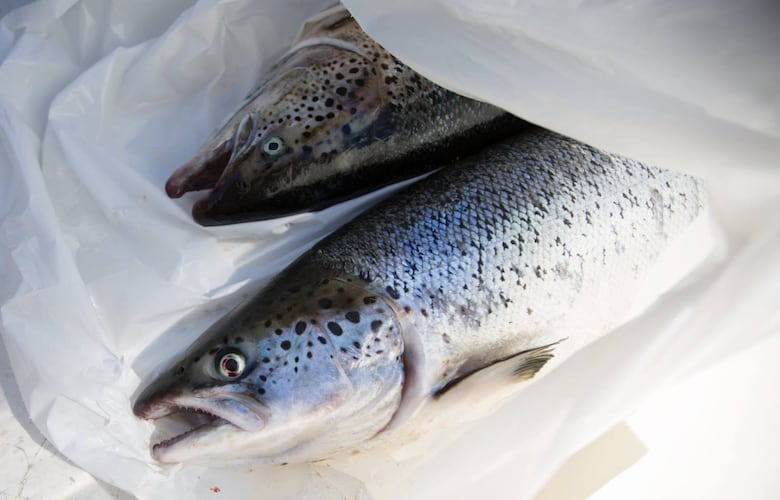 Atlantic salmon were caught in the Puget Sound after Cooke Aquaculture’s net pen was damaged. There is no way to confirm if the fish pictured here are the fish that escaped. (Beau Garreau)

0 #1 Casimira 2021-07-22 09:19
Pretty part of content. I just stumbled upon your website
and in accession capital to assert that I acquire
in fact enjoyed account your weblog posts. Any way I will be subscribing to
your feeds and even I success you get right of entry to persistently rapidly.