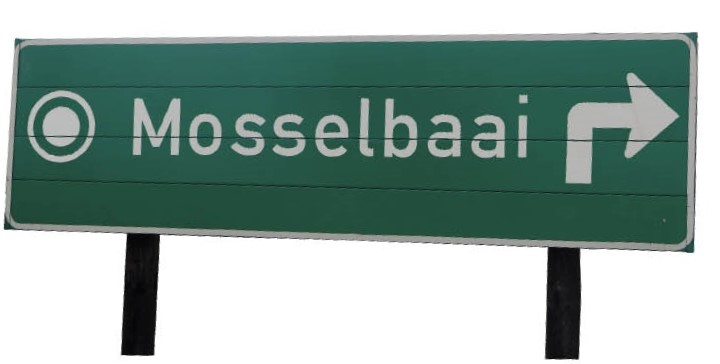 Politics in local government : People have the power

“I would say that people should pay very special attention to what is going on in politics because it affects everything. People should also take the power that they have in their votes and use it to hold politicians to account.”

These prophetic words of the DA's MP for Mossel Bay Johan Jaco Londt to South Africans on the People’s Assembly website have become more applicable than ever in local government where residents and ratepayers have become helpless victims who have to foot the bill for party politics and deadly power struggles that bleed them dry and  voiceless.

The gunning down of Knysna's ANC ward 8 councillor Victor Molosi in July - believed to be a political hit - accentuated the gravity of the  political arena in the Western and Southern Cape where the power struggle between the DA, ANC and EFF are due to intensify dramatically in the run-up towards next year's national and provincial elections.

Meanwhile, most citizens in the country have become so disillusioned with politics, corruption and crime that they seek to escape from it all by either emigrating or seeking solace in remote places and self-sustainable eco-villages where they can live independently off the grid . . .

Mossel Bay is regarded as one of the last "outposts" in the country where good governance and exquisite nature have remained intact despite the mayhem, corruption and destruction in many towns elsewhere. However, Mossel Bay is not isolated and immune to the political winds of change . . .  and therefore ordinary citizens and residents need to heed the above advice and start paying attention to what is happening in local government politics and how it affects them.

Things can change overnight, as many a beautiful town has learned the hard way.

It is residents who make or break a town and taxpayers' money that pays for either the upliftment or destruction thereof.

Very few people have time to attend municipal meetings or to follow council decisions and thus they are totally ignorant of serious changes that might affect their lives - for better or worse - until it is too late.

In today's turbulent political times it is crucial that people stay informed, stand up and speak up for what is right and in the interest of their town . . . the power lies with the people and NOT with the politicians.

WHEN did people forget that?

As Mosselbayontheline is a totally Independent and Non-political media-platform FOR the community BY the community, we would like to keep you informed of serious matters and also help to play watch dog.

The underneath issues raised by the ACDP in recent council meetings are important to all: 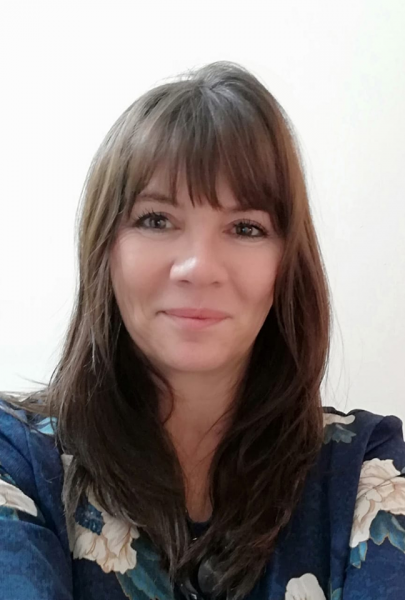 ACDP REJECTS "AS UNAFFORDABLE" THE INCREASES TO THE SALARY BILL OF THE MOSSEL BAY MUNICIPALITY.

ACDP-councillor Jeanette Gouws in Tuesday's council meeting rejected a change to the municipality's micro-organogram to create another post in the Municipal Manager's office, asking why a new post is being specifically created when the existing structure could just be streamlined to be more effective.

Consultants were appointed at great cost to construct an organogram and did not see any need for an additional post in the office of the Municipal Manager. Why then did we spend so much money on a consultancy, just to ignore their recommendations?

The proposed changes to the micro-organogram entail that a new post for a principle clerk be created to liase between the internal auditors and the municipality. A further two posts will be amalgamated into one; that of Risk Management and Compliance and Institutional Performance Management and SDBIP.

Gouws questioned the cost-effectivity and necessity of such a change. She said in a media statement the additional position to be created is unnecessary "as the Internal Audit Committee and the Financial Department of the municipality are surely capable of liasing directly with each other with regards to recommendations or concerns."

"The change will also not constitute a saving, as the effect of amalgamating two posts is negated by the creation of a new post for a principle clerk. By amalgamating two posts, the question needs to be asked if one person will be burdened with two positions' work or are the two original positions actually not necessary?" she asked.

"Consultants were appointed at great cost to construct an organogram and did not see any need for an additional post in the office of the Municipal Manager. Why then did we spend so much money on a consultancy, just to ignore their recommendations?" she asked.

These hidden costs come in the form of consultant fees of 13 MILLION Rand and outsourced services of 45 MILLION Rand.

This is in addition to the salary bill of 293 MILLION Rand. 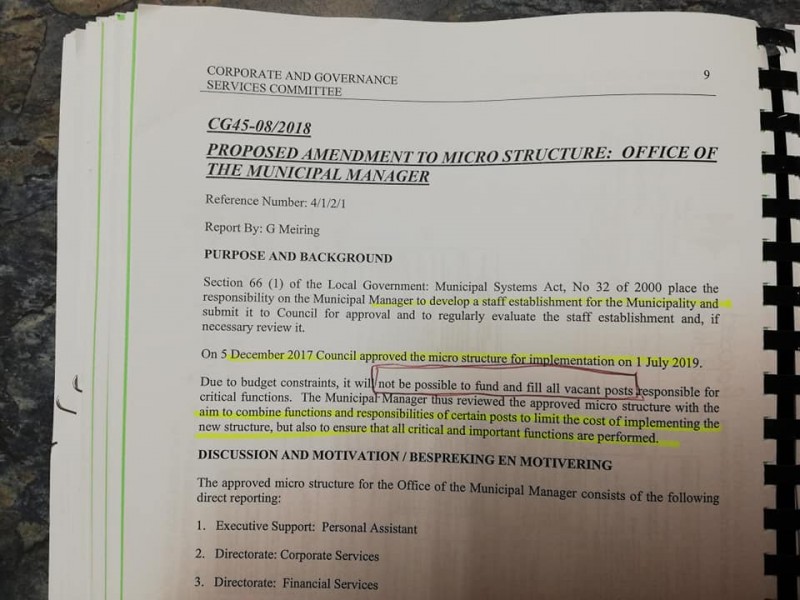 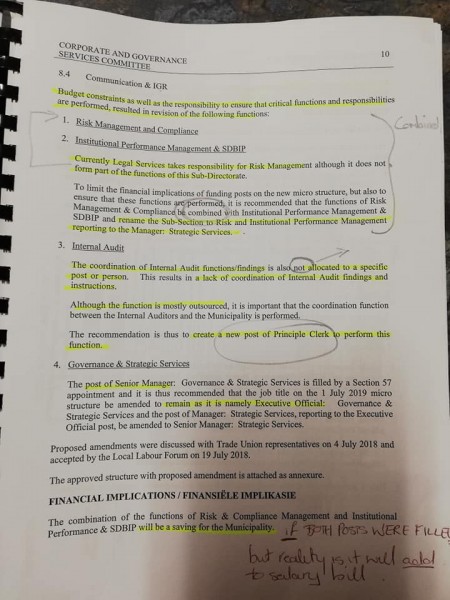 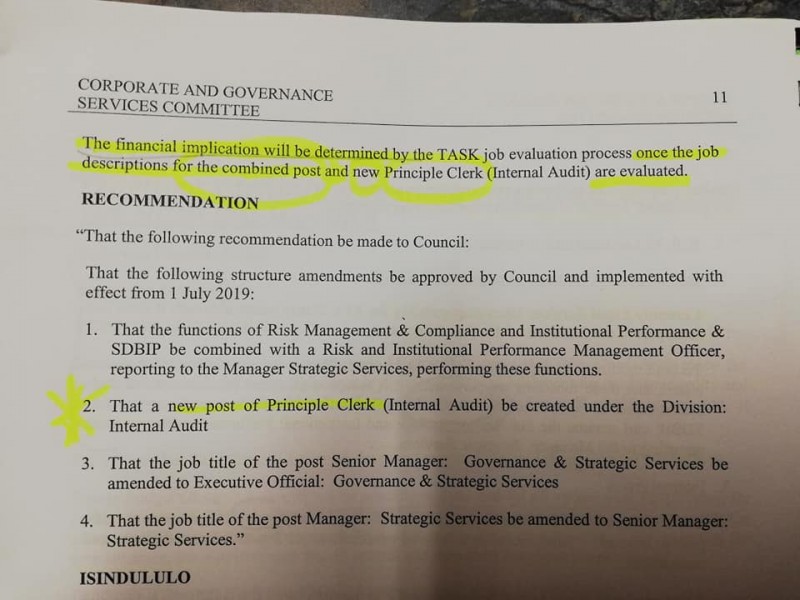 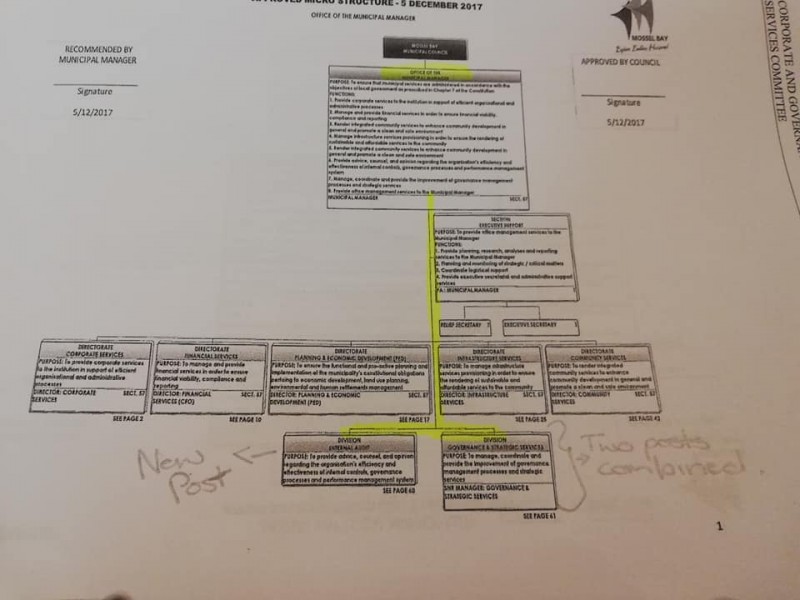 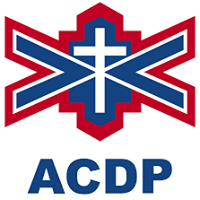 • HUMAN LIVES AT RISK DUE TO UNSAFE, HAPHAZARD CONNECTIONS

The ACDP appreciates the fact that the Mossel Bay Municipality finally established a Municipal Public Accounts Committee (MPAC) to oversee all municipal and local government matters. However, the party is disappointed that the committee will only have representatives from two parties (ANC and DA) which is contrary to Section 160 Part 8(a) of the Constitution and therefore the ACDP cannot be part of the commitee.

The ACDP, along with other opposition parties in council have been arguing for the establishment of an MPAC rather than the Oversight Committee which was tasked with performing oversight over the DA governed municipality.

The MPAC committee is supposed to have a wider term of reference, a framework, with regard to keeping the administration and political government accountable and transparent. The Mossel Bay municipality was one of a very few municipalities that only had an Oversight Committee, this despite the encouragement of the Western Cape Government and SALGA that an MPAC be established.

It is however most unfortunate that the DA seem to be unaware of the full function and the aim of such a committee. Only two parties will form part of the committee of seven members. This is such a pity as the role of the committee is to act as a watchdog over all matters of the municipality and the government of the leading political party.

In a council where five political parties have representation this is in effect frustrating full oversight of the decision of several thousand voters in the Mossel Bay district who trusted specific parties' representatives to ensure clean governance is upheld.

This is contrary to Section 160 part 8 (a) which states that members of a municipal council are entitled to participate in it`s proceedings and committees in a manner that allows parties reflected within the Council to be fairly represented.

This also defeats the true meaning of democracy which in essence was meant to be “the many” shall govern as opposed to the common belief that “the majority” shall govern. This is particularly the idea central to the establishment and the working of an MPAC.
The aim of an MPAC is not to align the committee according to proportional representation, but to rather draw in all parties in an effective and cooperative oversight role where all parties work together. During the ACDP councillors tenure as the Chairperson of the Oversight Committee she continuously stressed this cooperative attitude and reminded councillors that no one of the members were opposition to each other in such committees.

The idea of such committees is that representatives from all represented parties reach consensus on matters discussed. The DA has however arranged the committee giving themselves a majority of representation.

This shows the true intent of the DA and is indicative of a premeditated intention to force a vote on issues which should only be decided on conscience and whether a matter is right or wrong.

Response to a personal attack aimed at Mosselbayontheline in...