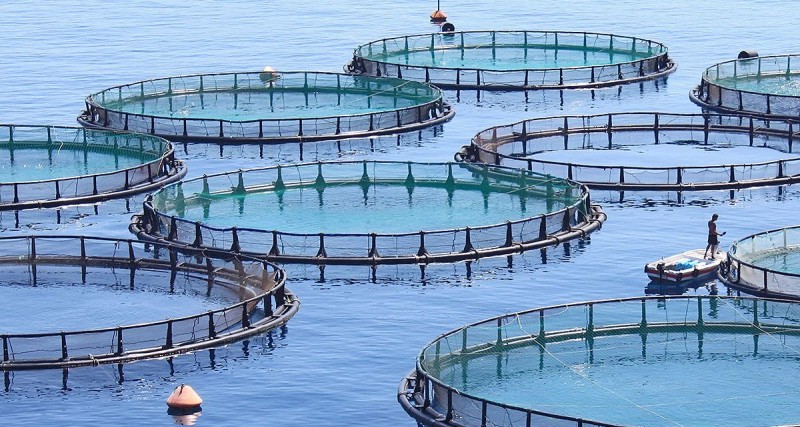 A fishy farce . . . Is Mossel Bay bullied into risky fish farming experiments by the powers that be?

That's the best description we heard for last night's Indaba in the Mossel Bay Town Hall, hosted by the Mossel Bay Advertiser to discuss the so-called "proposed plans" for an aqua-culture development in Mossel Bay's waters.

The huge crowd of approximately 150 residents who attended the meeting, expecting to have all their questions and fears addressed, left more confused than informed after watching Power Point clips presented by three representatves from different departments about the lengthy legal processes to be followed and all the governmental authorisations needed to start a fish farm in the sea. 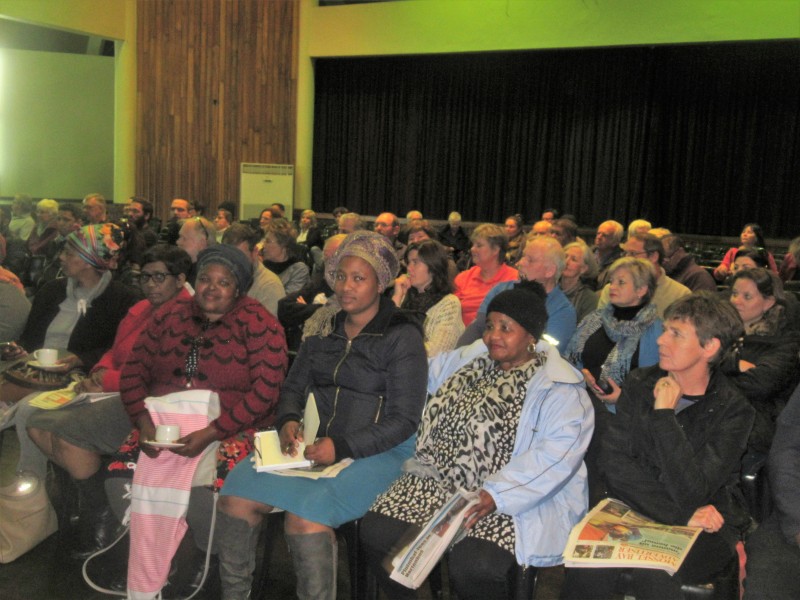 Hallo? When has that decision been made and by who? Despite the previous deafening public outcry AGAINST any such plans in Mossel Bay's prolific sea waters, backed by solid, scientific evidence to why it is not feasible in this area?

The fact that the Department of Agriculture, Forestry and Fisheries (DAFF) apparently had already been asked by the Mossel Bay Municipality to do an Environmental Impact Assessment (EIA) to determine the viability of such a project along our shoreline, is mind-boggling. Isn't that putting the cart before the horse and creating hope and job expectations prematurely? Do the residents havo no say in the matter before the go ahead for such a drastic and costly study is given to the government, who is desperately seeking aquafarming opportunities and will, no doubt, jump at the opportunity? 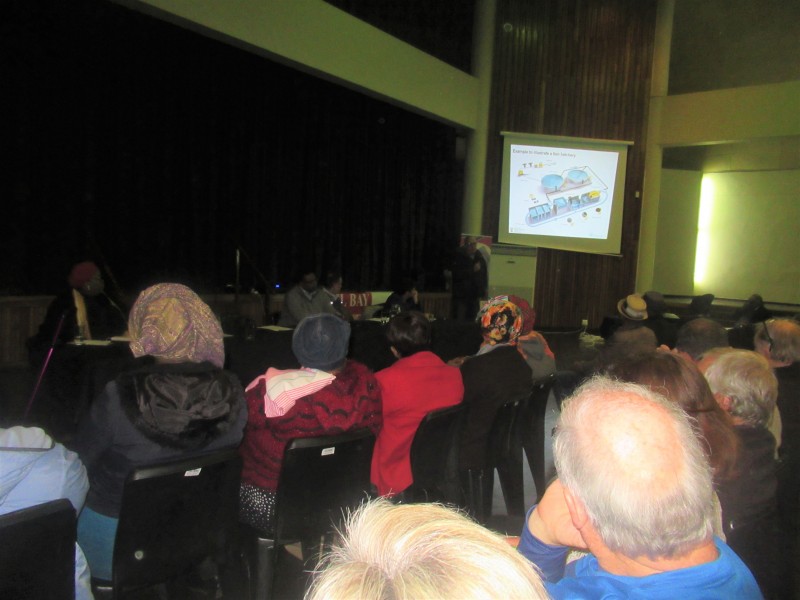 WHY would any department (in this case government) spend millions on such a costly and lengthy research project if there is no guaranteed long-term gain and certainty in it for them? Another risky, state-funded Phakisa / PetroSA project in a specialised field of which South Africa has very limited practical or theoretical experience and skills compared to the rest of the world  - especially where farming with yellowtail is proposed in prolific waters frequented by rare and endangered marine mammals such as orcas, whales, sharks and dolphins . . . 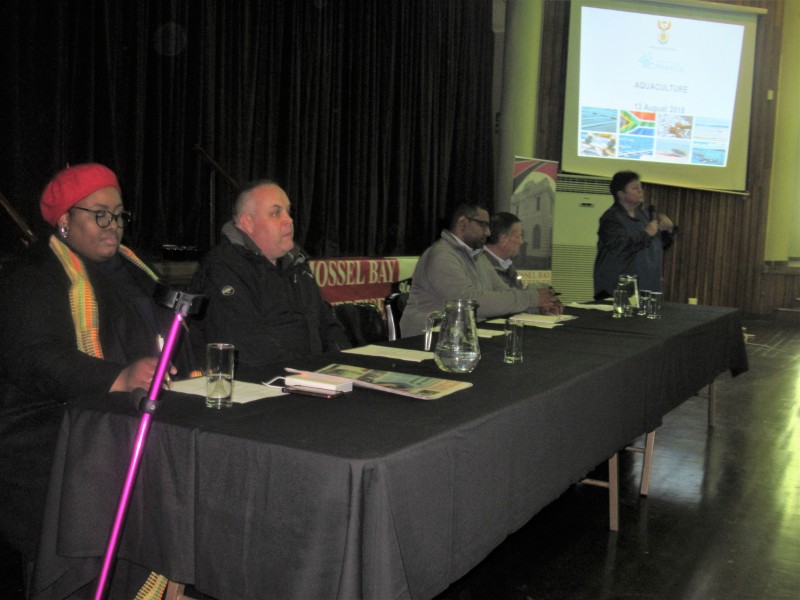 The Indaba was short, not so sweet and utterly confusing and disappointing. Convenor prof. Erwin Schwella of the University of Stellenbosch's Business School reminded the audience that the meeting is only informative and the first of many Town Hall discussions to promote public open talks about various issues.

Guest speakers Ferdie Endemann of the department of agriculture and Kishan Sankar, aquaculture advisor for DAFF's Operation Phakisa in the directorate aquaculture and economic development, showed some clips from their website regarding the advantages of aquafarming towards job creation, food security, rural development and economic growth. The stringent processes, legislation, policies and programs that are involved to comply with international obligations and standards were also briefly mentioned.

While all the while the audience was wondering why these issues are discussed when they basically want to hear specifics regarding the zoning area, the fish species involved, the impact on the environment, marine species and tourism, etc. in order to make an informed and calculated decision. 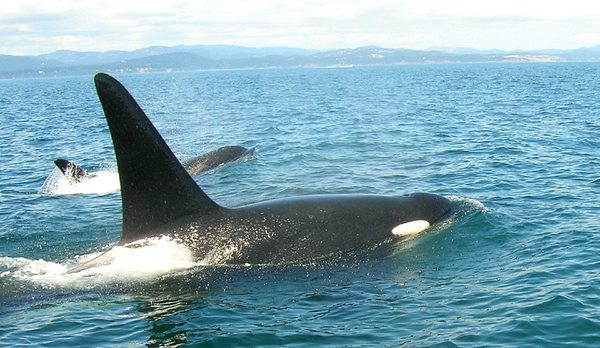 The audience was only allowed less than twenty minutes to ask questions . . . and thus only five or six people had the opportunity to quickly raise an issue: How will it affect tourism; what about the gigantic marine mammals in our waters; will it benefit all people, or only a handful of rich whites; will local people be employed, or will skilled outsiders be brought in . . .. .

And then time was up and the flabbergasted audience remained seated while prof. Schwella made a hasty exit . . .

None of the questions could be answered - all issues mentioned will be considered in their studies, research and EIA.

Now why does one get the disturbing impression that the decision has already been made  . . . and that from now on it's basically a matter of gradually reeling in the public and desentisizing them to the enormity of the risks and environmental threats to our marine ecology, water-based tourism and wild fish resources - to name just a few.

The repeated explanation that this meeting is just the first of many in a "process" to engage the public in "open talks" added insult to injury. Process towards what? Why are we even talking about something that is not necessarily going to happen, unless it has already been decided?

Once the environmental impact assessment has been done, a few public participation processes will be allowed and (maybe) a few adjustments will be made to accommodate some concerns, but once the ball is rolling, there is no stopping or turning back.

Even lengthy court cases to appeal, has been proven futile - as is currently the case in the West Coast where residents have been trying to fight the proposed finfish farming project in the already badly polluted Langebaan lagoon for the past two years . .. and lost again. The water around the Saldanha Bay harbour is so polluted that the farmed and wild mussels now both pose a threat to human safety, yet DAFF is going ahead with its pilot finfish farming project in that polluted waters  . . . creating jobs by raising inedible fish?

Questions that needed to be asked before DAFF embark on a multi-million rand EIA study, include:

What company has shown any interest since I&J pulled out in 2011 after spending a fortune on environmental and feasibility studies and what (local or international) company will eventually head the project? And what has changed in the industry since 2011 that make public and environmental concerns now less valid than then? 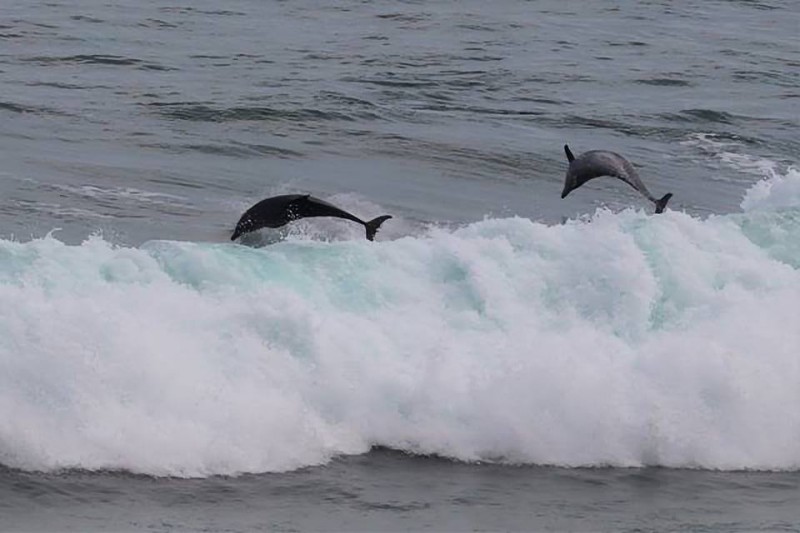 On the contrary -  the disastrous long-term effects of this lucrative "plastic fish" industry on wild marine life species and the irregularities in the trade are only now starting to surface more and more - including severe toxicity in farmed fish and seabed pollution that kills off millions of small organisms and disturbing the natural balance of sea life. So much so that many first world countries, including America and Alaska, have altogether banned farmed fin fish in their waters . . .

Even in EU countries, marine fish only makes up 21,8 % of aquaculture species, while molluscs and crustaceans such as mussels, oysters, clam and abalone are on top of the list at 43,6%, followed by freshwater fish at 34,6%. We wonder why? 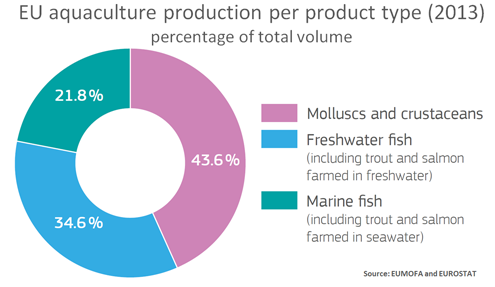 No, we KNOW why and it is common knowledge across the globe . . . except in sunny, slow South Africa?

Fish escaping the cages and infecting wild fish with sea lice and other parasites and bacteria have become such a crisis that farmed fish needs to be fed more and more antibiotics as they grow immune to it - apart from the growth hormones, pesticides and other chemicals they are fed to control diseases in the floating pens. WHO in their right mind would want to EAT anything raised on such a toxic and unnatural diet that also has no nutritional value at all?

WHY is farmed fish species only tested for certain toxic trace elements and pollutants, but never for their nutritional value?

What happened to ethics and morality, or is it okay for corporate companies and governments to feed the poor masses harmful, nutritionless food in order to make money - under the pretence of job creation and the false alarm of saving them from a worldwide food scarcity? It is even double exploitation to use their labour in this diabolic industry to grow and process food which is harmful and valueless to their own health and well-being. Just because they do not know better?

This comes amidst two of the biggest abalone scandals in the Western Cape in which DAFF officials are directly implicated:

One cannot help wondering how much money the SA Government truly has for re-inventing the wheel and repeating the same costly studies and getting the same results . . . ? Along the West Coast, the ongoing legal battle to protect the Langebaan Lagoon from the same Phakisa aquaculture developments has just picked up new momentum with a vigorous fundraising campaign . . . and elsewhere in South Africa similar projects have proven to be a dismal (and very costly!) failure . . . ?

Save Langebaan Lagoon Committee members have been busy over the last few weeks consulting with attorneys and advocates, experienced in environmental and administrative law litigation. We have taken note of their professional guidance and recently instructed an advocate, Peter Kantor, of Kantor Legal Services, to draft an opinion on our prospect for success in legally challenging the decision by the Minister of Environmental Affairs to dismiss our appeal against the ADZ authorisations.

This is an important intermediate step, to provide clarity and certainty and to assist us in making an informed decision before we proceed with a judicial review. Advocate Kantor will assess the merits of our grounds for appeal, focus on the strongest grounds for a review, as well as provide strategic advice.

We will need to raise R200 000 by mid-September in order to cover this aspect of legal services.

Thereafter, if counsel’s opinion indicates that we have a winnable case, we will instruct a suitably experienced attorney to draft application papers and launch a judicial review, before the 5th December 2018. The attorney will brief the advocate who will present our case in the High Court. The case preparation and the litigation process will require an upfront payment to the attorney’s trust account of approximately R1.8 million.

We have just begun a robust fund-raising drive. If you would like to assist in anyway, please urgently contact us This email address is being protected from spambots. You need JavaScript enabled to view it.

How do you donate?

The legal and costly battle between the action group Save Langebaan Lagoon - an international kitesurfing Mecca - and the various departments has been going on for a long time . . . 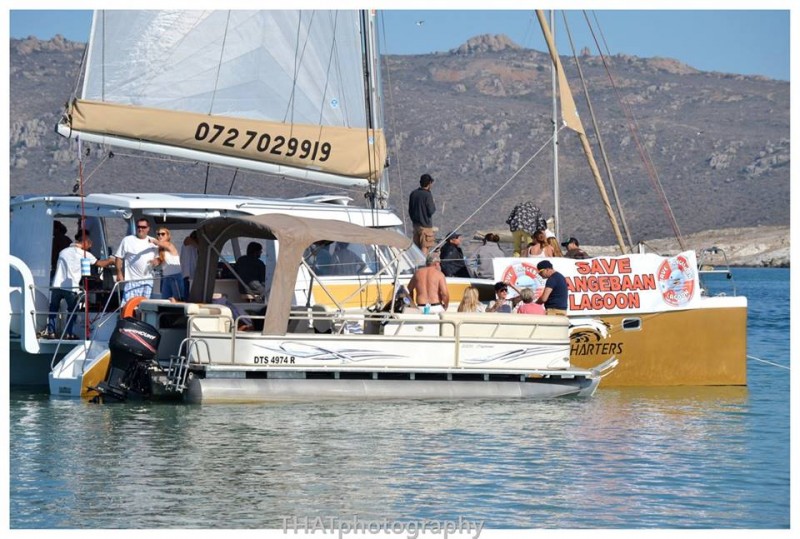 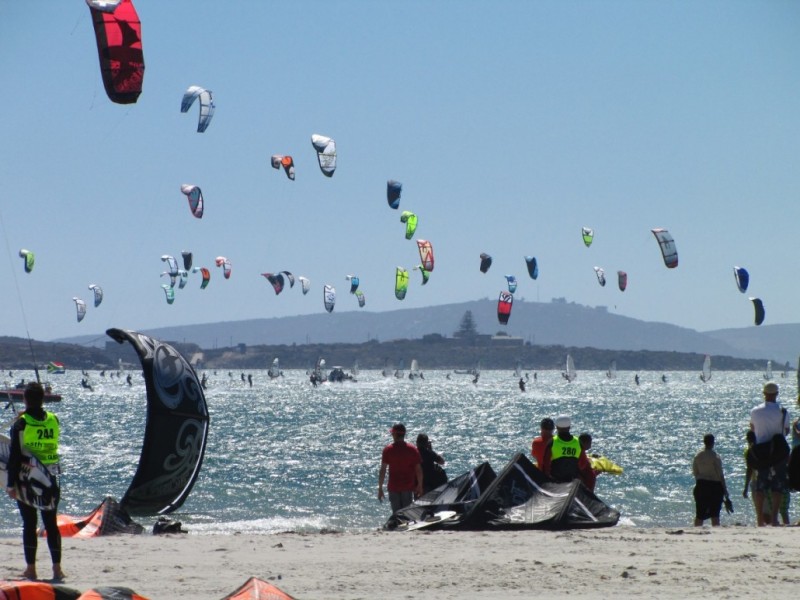 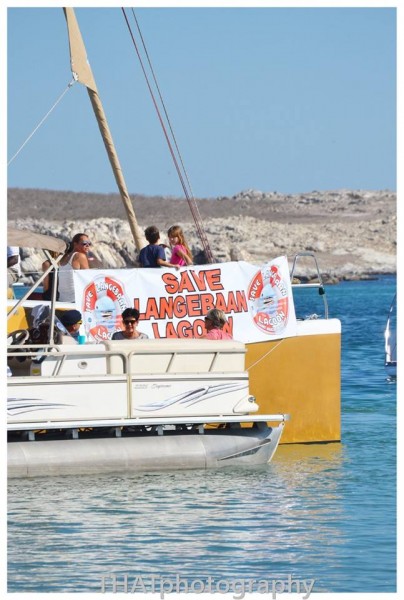 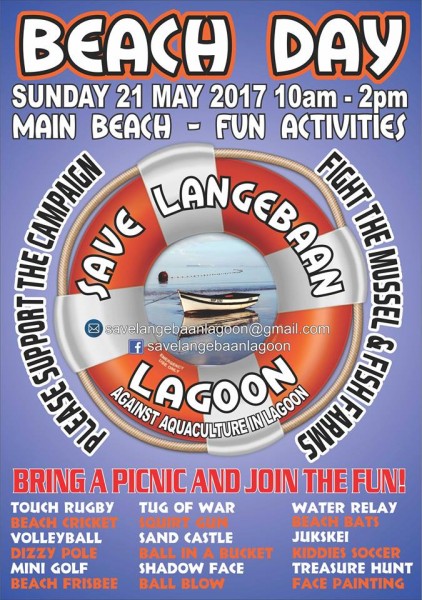 In Gansbaai and other regions in South Africa, all pilot projects to farm with FINfish in the sea have been abandoned after it proved to be unsustainable and a costly disaster for various reasons. In Gansbaai, all the salmon escaped . . . like all over the world.

South African waters are particularly perilous and the prolific presence of migrating endangered marine mammals such as whales, sharks, dolphins and orcas should be enough reason to ban any finfish aquaculture activities along our coastline - as America, Alaska and other countries have already done.

Must we first repeat their mistakes to the detriment of our pristine marine life before we learn . . . ? At what cost? Could that money/time not have been used for more viable and sustainable projects to create jobs and feed the poor?

Also watch the underneath videos to see firsthand what is TRULY happening in the industry in Norway and elsewhere.