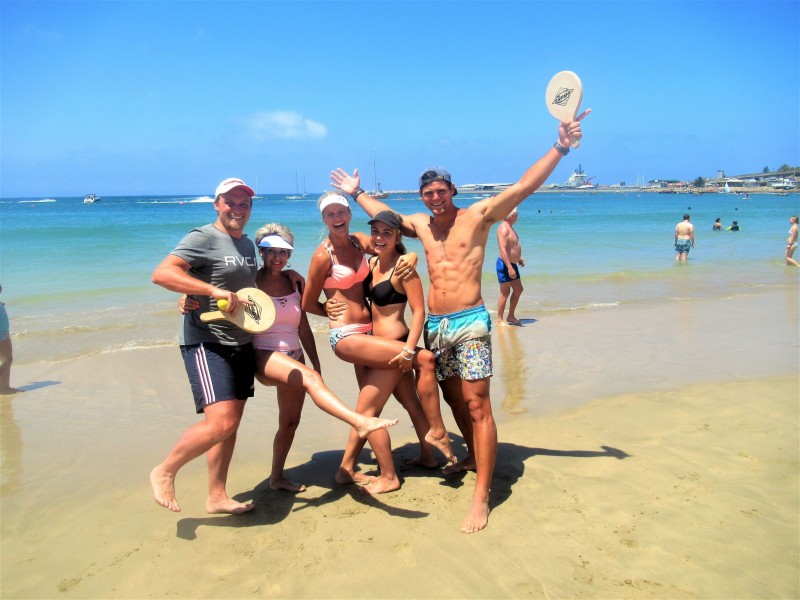 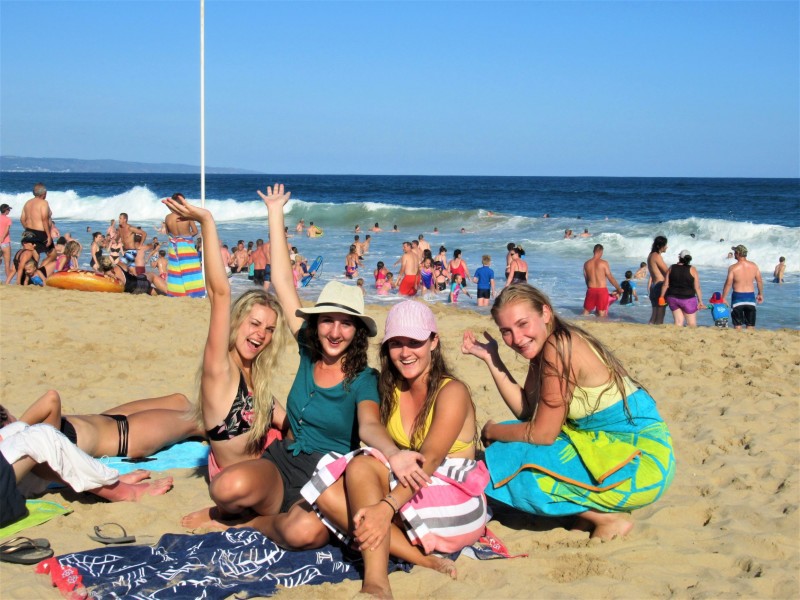 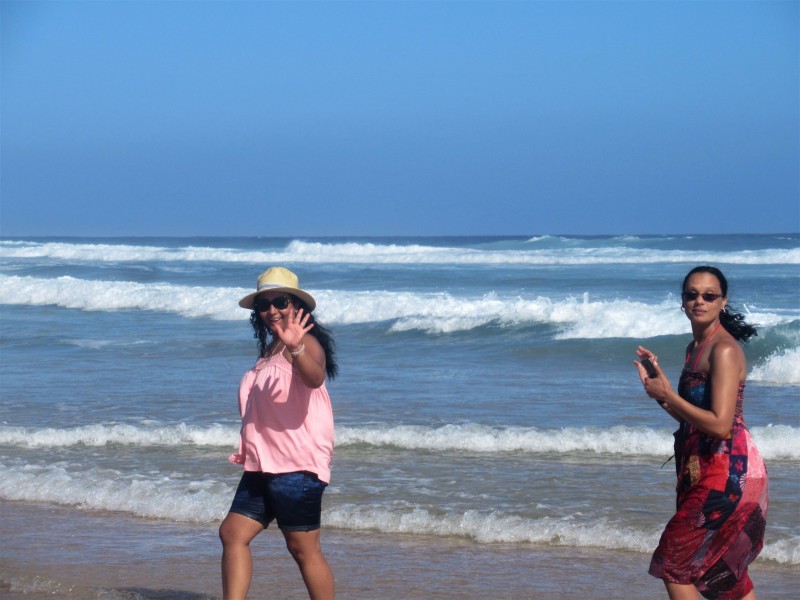 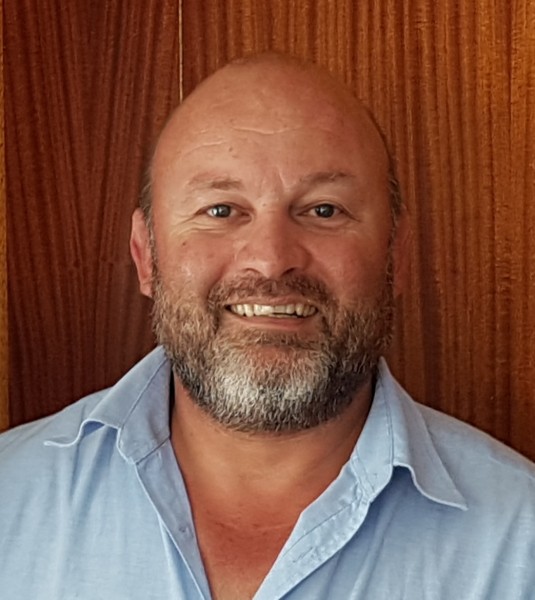 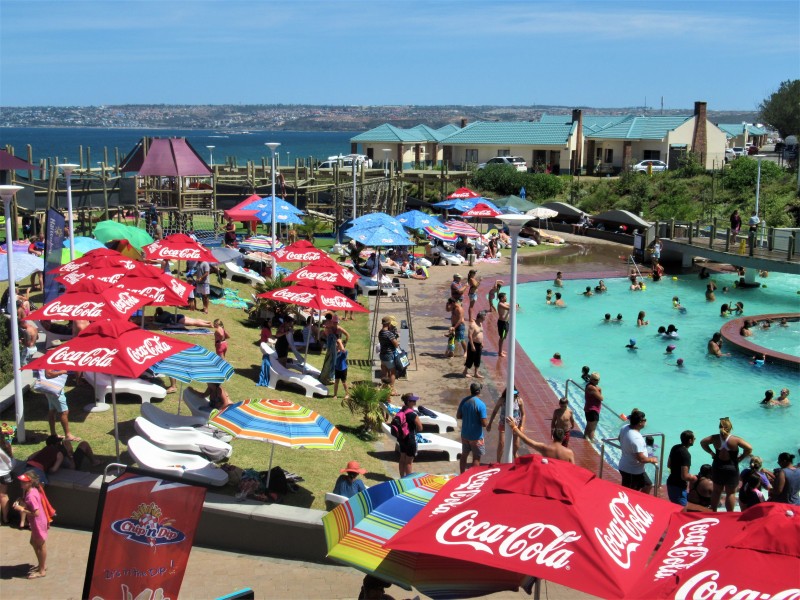 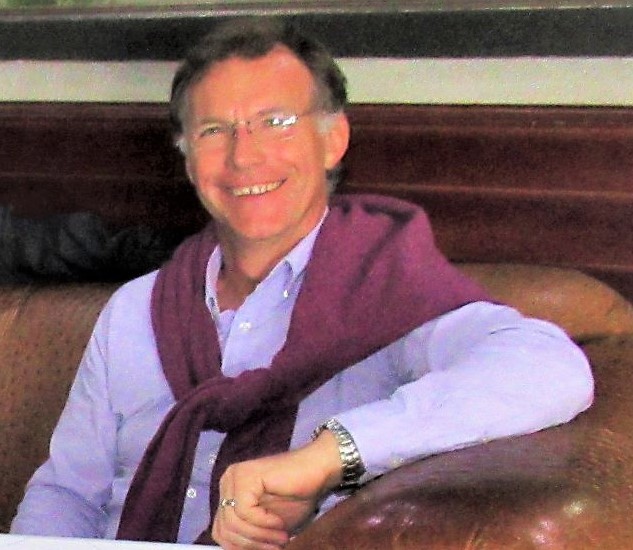 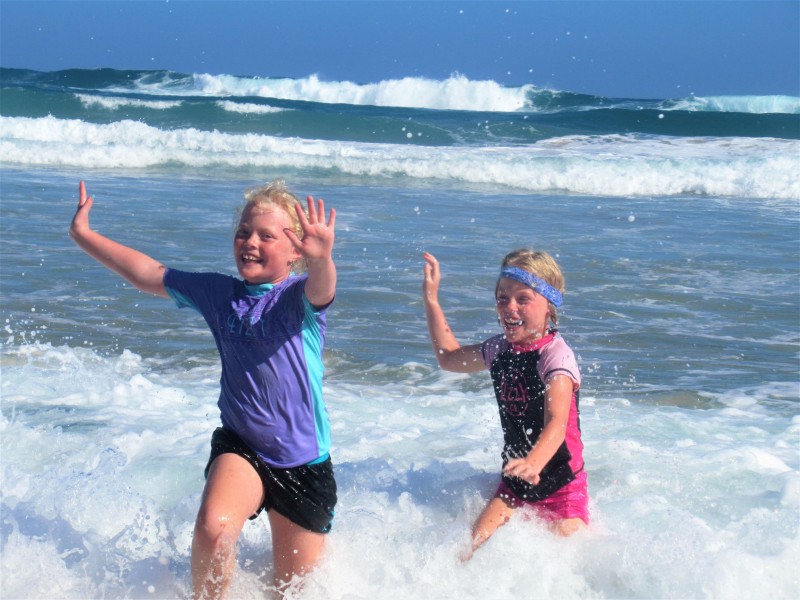 Sorry, Mr UN Secretary-General, they just keep on jumping in front of us . . . photo-bombing ALL the nature shots!

The UN assignment was:
"Since the United Nations has noted and duly agreed that the coastal town of Mossel Bay in South Africa is the worthy winner of the Happiest Holiday Town in the World title, can you please supply us with additional material that focuses on the town's main assets, culture, landmarks and tourist attractions?" - António Guterres, UN Secretary-General.

We set off bravely with the camera last Sunday to capture Mossel Bay's most scenic and remarkable assets as a traveller/tourist will experience it.
Being such a glorious summer's day, the natural route would be all along the pristine coastline with its rivers, sandy beaches and seaside restaurants towards the harbour, museum, St Blaize cave & lighthouse right up to Pinnacle Point . . .

But OOPS - we did it again!
Got stuck within the first 200 metres of our photo-journey as we bumped into so many colourful people of all creeds and kinds, each with such interesting stories and tales, that we soon ended up in the water with them . . . and got dumped head-on on the seabed by a gigantic, neck-breaking wave (shore dumper) that almost left us paralyzed . . .

The same people who "photo-bombed"

;-) ALL our landscape photos, are the same people who, moments later, saved and assisted us and summoned an ambulance to transport us to hospital for emergency treatment . . . and that's where our Sunday photo journey ended . . . * (more at the bottom)

But, Mr António Guterres, these pictures are not staged photos of tourists and holidaymakers - they are mostly of ordinary citizens on an ordinary Sunday in sunny Mossel Bay - and maybe the UN will once again agree with us that the residents and citizens are Mossel Bay's most remarkable and main assets and tourist attractions . . . for it is the PEOPLE that make or break any place or town?

* OK, we admit we haven't (YET) send these pics to the UN's Secretary-General António Guterres, but following the overwhelmingly positive response to our "holiday virus" and "Happiest Holiday Town in the World" contest, we just might do it to help counter the extremely negative and one-sided world view of South Africa.

* Meanwhile, the summer holiday season in Mossel Bay was another BUMPER season and although most businesses claim the number of visitors was more or less the same as in 2017, the spending power was noticeably less and in some cases, businesses had a 15% to 20% drop in turnover. But all agreed it was one of the "hottest and happiest" holiday seasons ever . . . 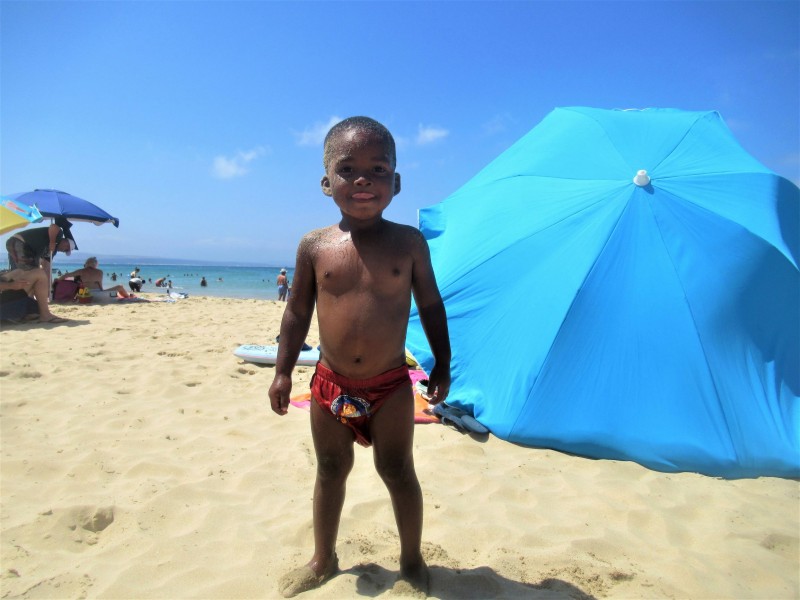 * This week it was back to school where an innocent class photo of a group of grade R pupils in Schweizer-Reneke was hijacked by the media and politicians to cause yet another sensational "racial uproar" . . . and in the Overberg, several runaway fires, fueled by gusting winds close to 100 kph, gutted more than 31 houses in the Bettys Bay area while residents of Franskraal/Gansbaai had to evacuate their homes where thousands of hectares of vegetation were destroyed in the blaze.

The ongoing fires in the Bettys Bay area were presumably caused by a flare that was illegally discharged on New Year's Eve, while political unrest over housing problems was allegedly the cause of the fires in the Gansbaai and Hermanus areas . . .

Can you blame us for posting mostly "happy" photos of Mossel Bay and its people?

Read more here about the Overberg fires and the increasing occurrence of spinal and other injuries from ocean waves:

Mossel Bay has a crisis. We are forced to report back that the highly contagious virus we warned against earlier, has NOT been contained and the symptoms have now spiralled out of control.
Mosselbayontheline was summoned to a restaurant today where locals and visitors from as far as Australia, the USA and the UK were desperate to find relief from some of the most severe side-effects of their condition that has caused havoc across the entire Garden Route since the virus erupted in Mossel Bay two weeks ago.

Apparently, an international expert on foreign diseases has recommended fresh wild oysters as a safe remedy for some of the worst symptoms . . .

We spent three hours watching how dozens of people devour plates full of massive oysters, but unfortunately, there was no visible improvement . . . On the contrary, the symptoms got worse and by the time we left, we have only managed to capture groups of giggling, bronzed, scantily clad people who all claimed they did NOT want to go home . . . !

Well, we warned you against the virus and its symptoms, but we never thought it will go this far . .. as Mossel Bay does not have the infrastructure (yet!) to accommodate some 200 000 extra people indefinitely . . .

The good news is that the virus and its symptoms earned Mossel Bay instant fame and an international title as the Happiest Holiday Town in the World . . . but the BAD news is that fresh wild oysters only enhance the symptoms . . .

Yes, this is an ad for Oyster World and an excuse to continue showcasing the happy holiday vibe in the Mossel Bay area!

Update: The virus reached a new peak this morning after the Matric Results were published . . . and Sao Bras was the first local school to proudly share their students' delight!
These were the virus symptoms for those who missed it:

* On a more serious note:
Hundreds of happy visitors will (have to!) brave the congested roads to go home in the next week and we would love to have you back soon. Please drive carefully.

The roads have already claimed one visitor to Hartenbos earlier today when a woman from Beaufort-West was tragically killed in a head-on collision near the Robinson Pass between Mossel Bay and Oudtshoorn.

According to the Oudtshoorn Courant, the deceased was a passenger in a Nissan TIIDA that spiralled out of control and collided head-on with an oncoming Isuzu bakkie.
The driver of the Nissan, an elderly woman, was injured and taken to hospital by an ambulance.
The two women were on their way home to Beaufort-West after a holiday in Hartenbos.

The driver of the Isuzu bakkie was apparently on his way from Merweville to Hartenbos and escaped without injuries. His caravan, that was attached to the bakkie, broke loose in the crash and came to a standstill near the scene of the accident.

* Sadly, Mossel Bay was again negatively (maybe unfairly?) portrayed in the national media today. Die Burger reported about a 16-year-old boy and his uncle who were allegedly attacked on New Year's eve on the beach at Tergniet while watching the fire display.
According to the vague report, the youngster's clothes were ripped off and his uncle's glasses were slapped from his face by two men of approximately 28 and 30 years old.

However, no charges were laid and it was furthermore alleged that the boy and his uncle were illegally lighting firecrackers in a restricted area when the two "attackers" approached them and tried to confiscate the firecrackers. It was only in the ensuing struggle that the boy's clothes and his uncle's glasses landed on the ground. 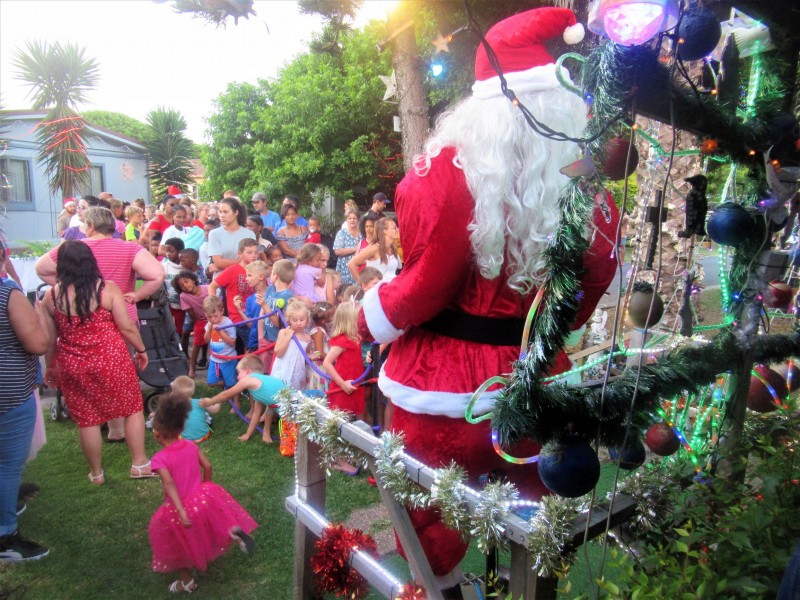 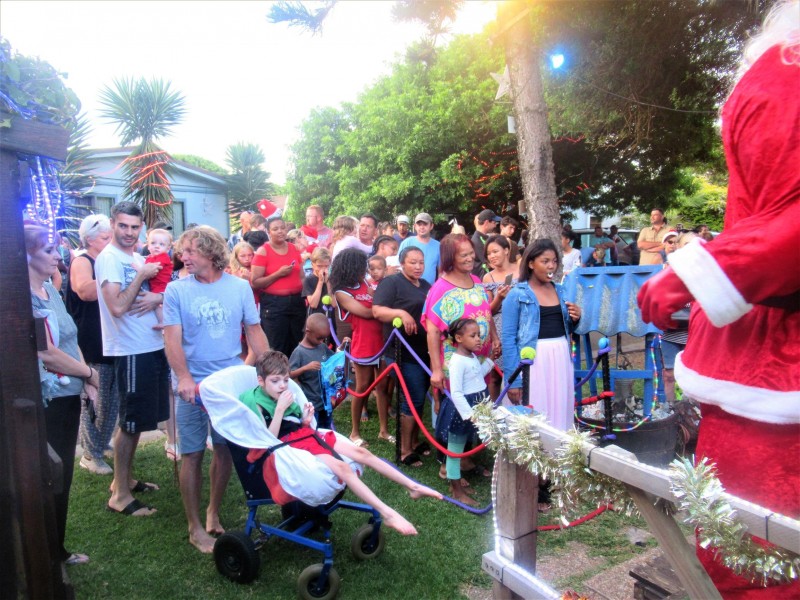 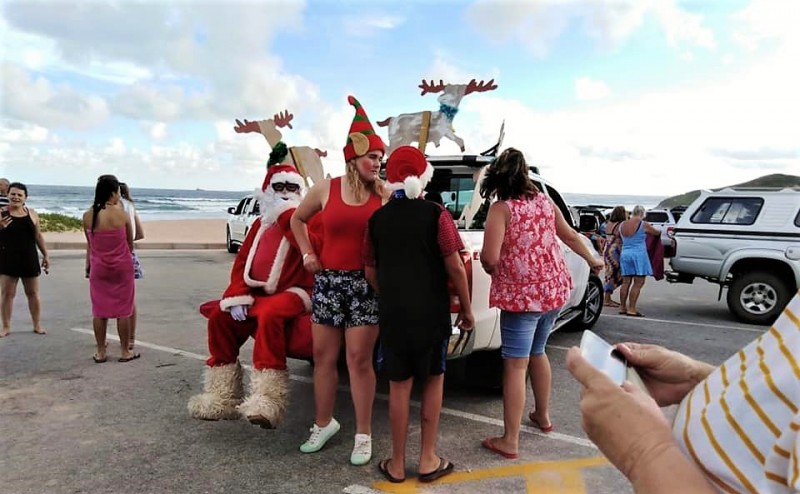 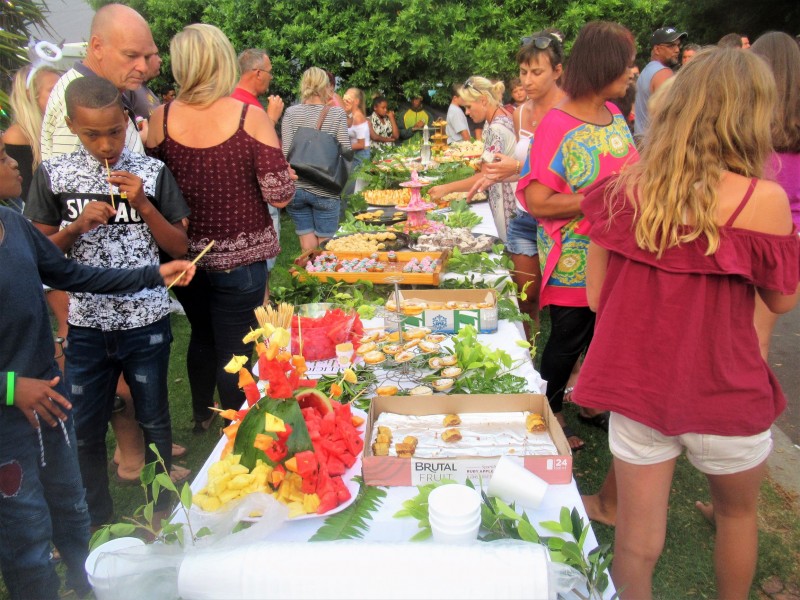 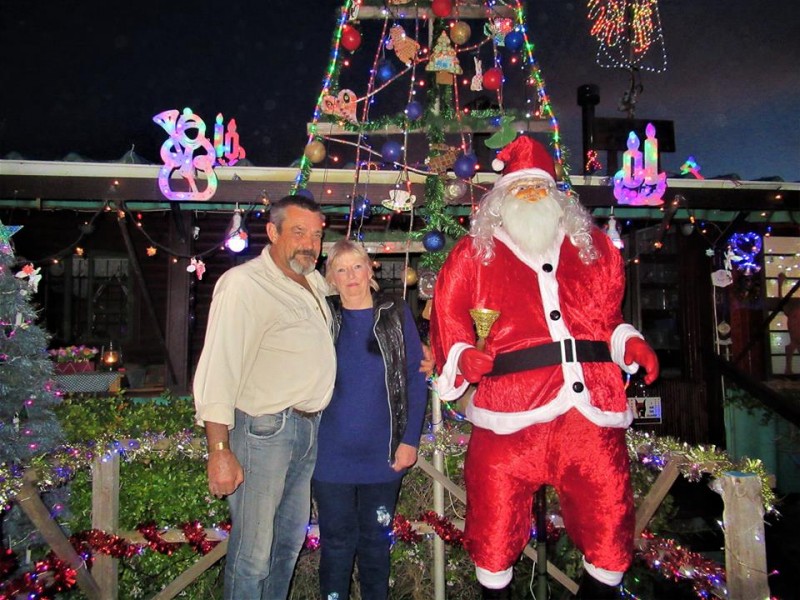 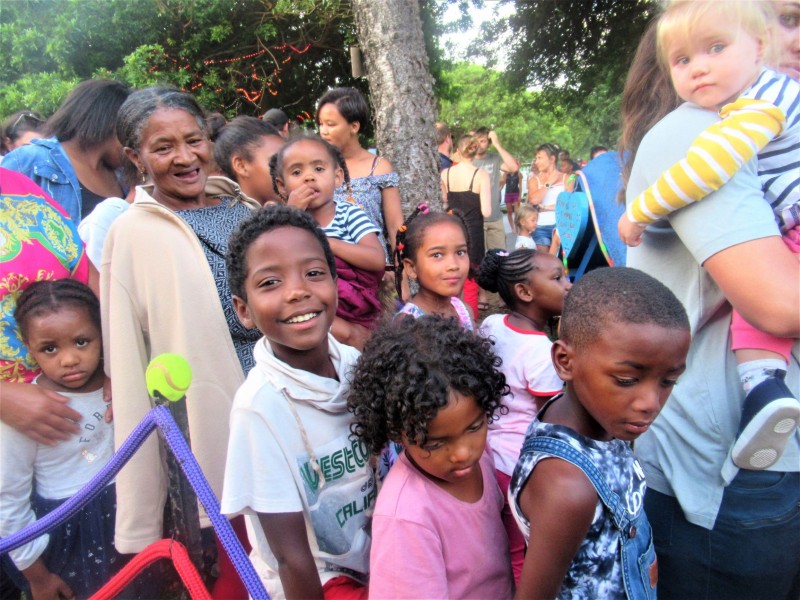 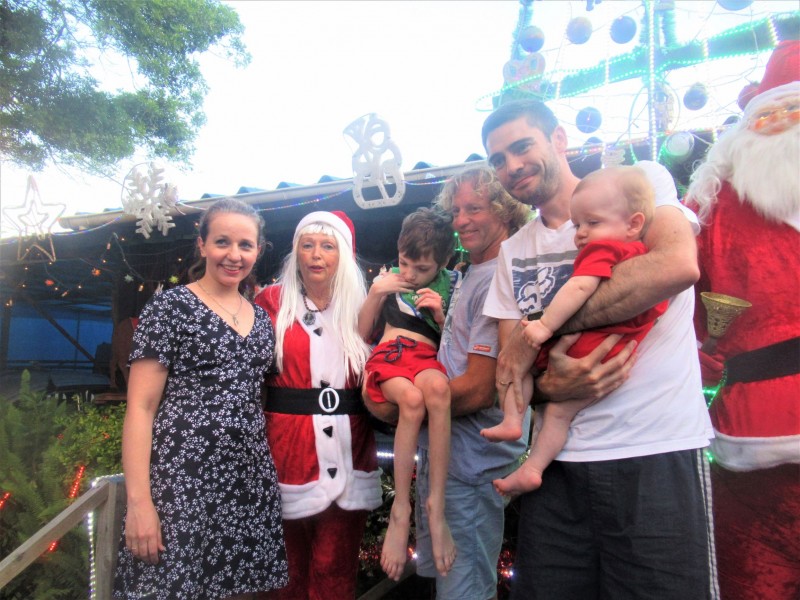 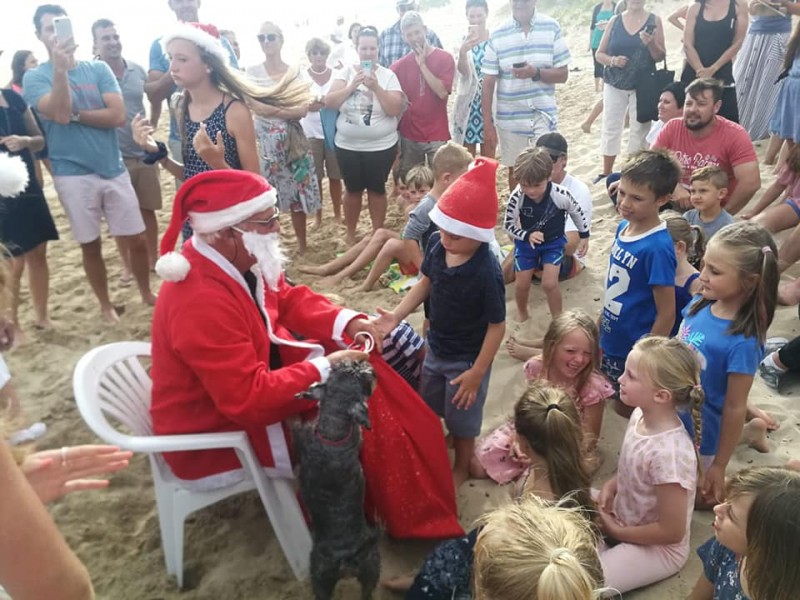 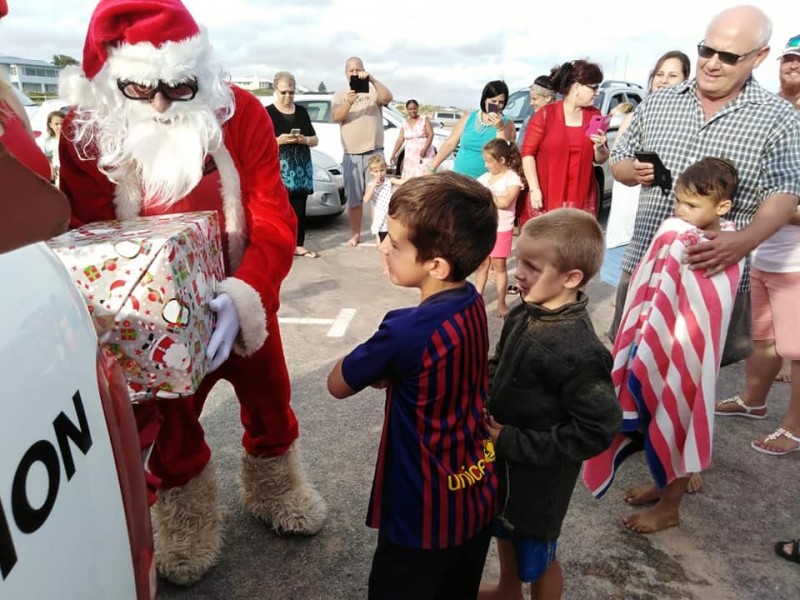 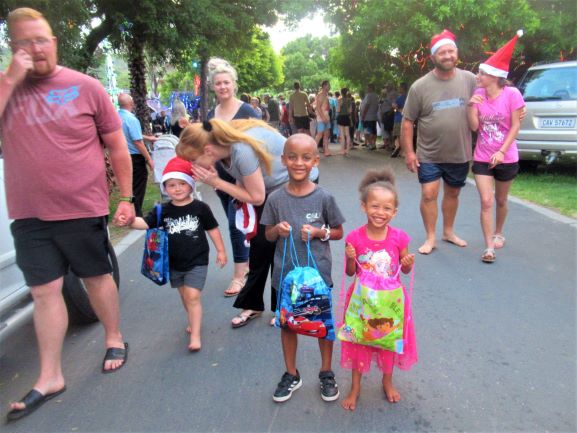 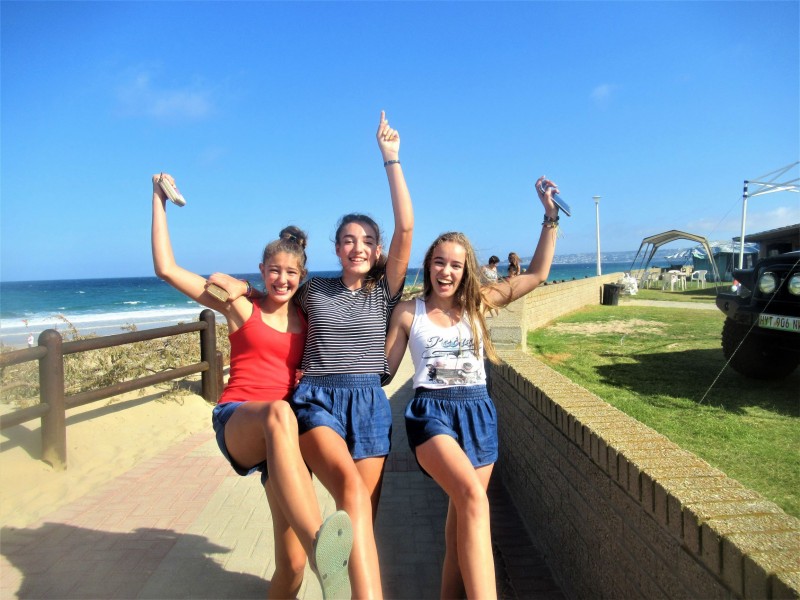 YAY - it's THAT time of the year along the Mossel Bay coastline again where 23 pristine beaches, sapphire skies and seas and a zillion outdoor & indoor activities await the thousands of visitors who flock here annually to escape from the toils and turmoils of city life and recharge their batteries . . .

Who can blame them? Just a quick drive along the Mossel Bay coastline . . . and the happy faces and high spirits we encountered everywhere is proof that the festive mood has kicked in and will prevail for the next two weeks . . .

Yeah, we know there are traffic jams; some shops and restaurants had doubled their prices; there are noise pollution from inconsiderate people and petty crime will always be a factor in sunny South Africa . . . but surely the beauty and bliss surpass the few irritations and with a little respect, consideration and patience all problems can be solved (or endured) amicably in the true spirit of the season.

The Mossel Bay region has donned her best attire to entice and enthrall ALL those who came from near or far to enjoy her exquisite charms and the local residents, businesses and authorities have worked hard to ensure a safe and SUPER STAY to all visitors.

* More happy holiday photos and information about the Road Works and the battle to save Mossel Bay's rivers and estuaries here: https://web.facebook.com/mosselbayontheline/posts/2302665799964674?